We’ve all heard of negatively charged particles called electrons. The movement of these electrons from one place to another creates electricity. Remember in high school when there were simple energy conversion experiments to generate electricity? In my school, we used potatoes and wires to adjust the flow of electrons and create electricity. You can try an experiment right now if you like. Try rubbing your feet on the carpet and touching a person or thing to discharge the build-up of static electricity.

Everyone knows and understands the basics of what electricity does, however many people become confused with what electricity actually is. The issue here may be because they don’t understand what electrons are. Don’t feel intimidated because even scientists can’t tell you what they really are, and why they exist. All you really need to know about electrons is that they have a negative charge and are attracted to positive charged particles (exactly like a magnet). Now if we create a path (using a wire) for these electrons to travel to the positive charged particles (protons), then we have generated electric current.

We’ve all heard of Voltage; and that our home electric sockets are roughly 120 Volts. Voltage is just the measurement of how fast the electrons are traveling and current is the measurement of how many electrons are traveling. If you think of water flowing through a hose, imagine the hose being the wire, the water is the current and the speed of the water flowing is the voltage. When you get your electric bill it shows that you used a certain amount of kW (KiloWatts). The ‘k’ stands for kilo which is metric system denoting multiplication by 1000, and Watts is used to measure ‘power’. Because you pay the electric bill on how much electricity you use, an intelligent Scottish engineer, James Watt discovered the equation for electric power with respect to time. This means that it is possible to calculate how many electrons have been used in your house over a certain period of time (remember, the flow of electrons is current).

To deliver electricity to all the households in the United States, we created what is known as an electric grid. The grid is a network which consists of power stations that generate the electricity, then carry it for hundreds of thousands of miles through ‘transmission lines’ to a substation, which lowers the voltage from a transmission level to a distribution level.

Until recently, the electrical grid went in only one direction, meaning that electricity was sent to your house and you were charged for the usage. With the invention of solar panels, families can also generate electricity. The beauty about generating electricity is that if you live in a place with lots of sun, you can generate more than you use! 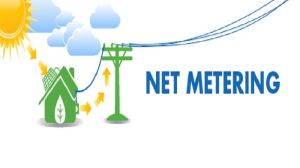 This is another way on how you can benefit from Solar Panels and a great way to help lower the impact of Global Warming!

As always, let me know if you have questions @ArberDoci